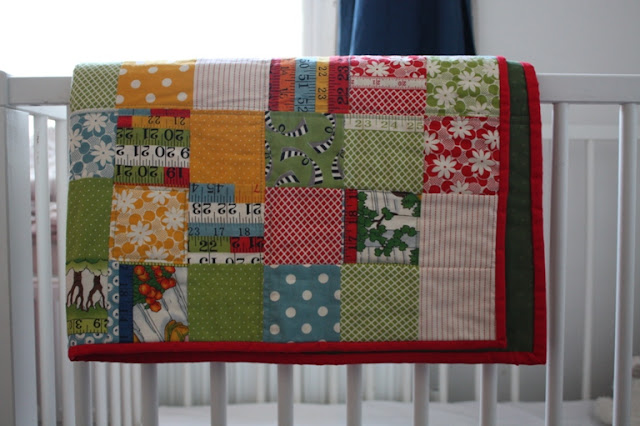 One of my best friends just had another baby.  Her twin boys are aged six, and I think the question of whether to go for number three was thought about for most of those six years.  Happily her then unknown presence was finally deemed very much necessary, and now she is here in the world and how very exciting and pleasing this is for us all.  Unfortunately, I won't get to meet her right away as she lives in Italy... Oh, how I would like to zip over and see them!

So, I made a quilt for her.  I pieced the top in a weekend which is unheard of for me, I don't know how I did it really, I think I may have been neglecting my children and husband somewhat.  Then it took me a little longer to back and quilt and bind.  The fabric is American Jane Recess.  I bought a FQ stack of this line yonks ago, and sadly I think this will be the last quilt it makes, but it has served me well.  It did this one, and this one.  And clearly that duvet cover picked up in the charity shop has done me well too, as it backed the three Recess quilts and this one!  Gosh, I am predictable aren't I? 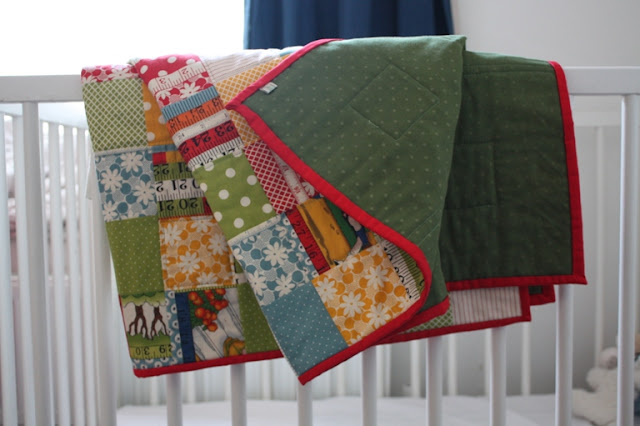 So, sewing is being slipped in between the rest of life.  Although this 'rest' of life is proving to be rather stressful.  We have sold our home and are in the process of buying a new one.  The new one being 200 miles away.  Eek. 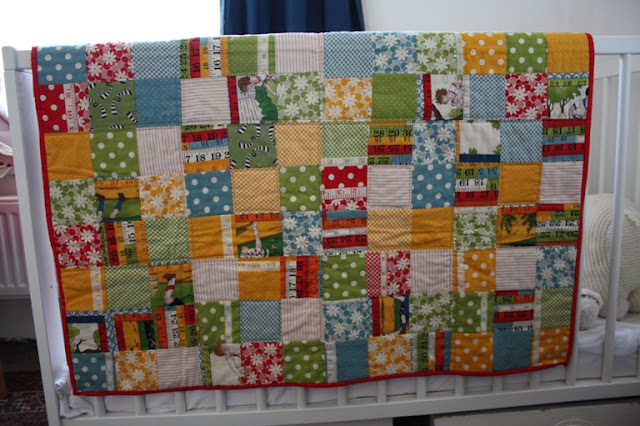 And, I would like to thank Knotted Cotton for this post, by reminding me that I have a blog.
at 14:20 6 comments:
Labels: Quilts, Sewing

How to make a lady very happy 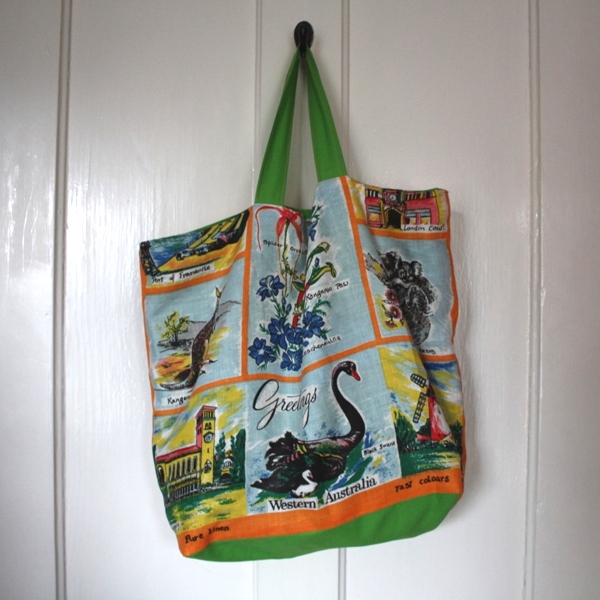 I made a new bag!  Whoopee!  I have had this t-towel since my hen do... we went to a car boot sale on the Sunday and I came away with, among other things, a stack of kitch souvenir kitchen linens. 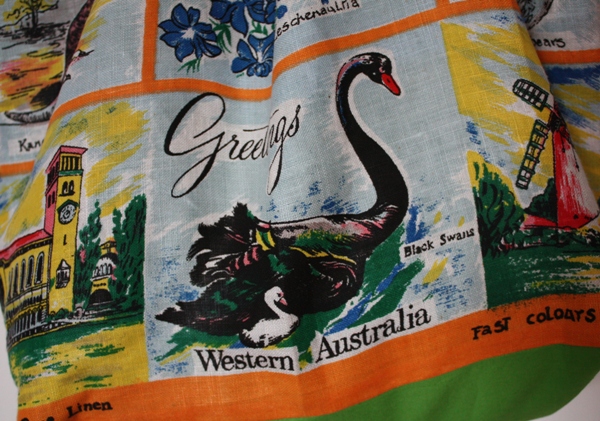 And, I made a bag... look!  I am so pleased.  This morning I went swimming and took my new bag and oh what a bright start to the day. Check out the fun illustrations... how could that not make you cheery?
The green handles and lining is Lime Klona Cotton.
Did I tell you that I love it? 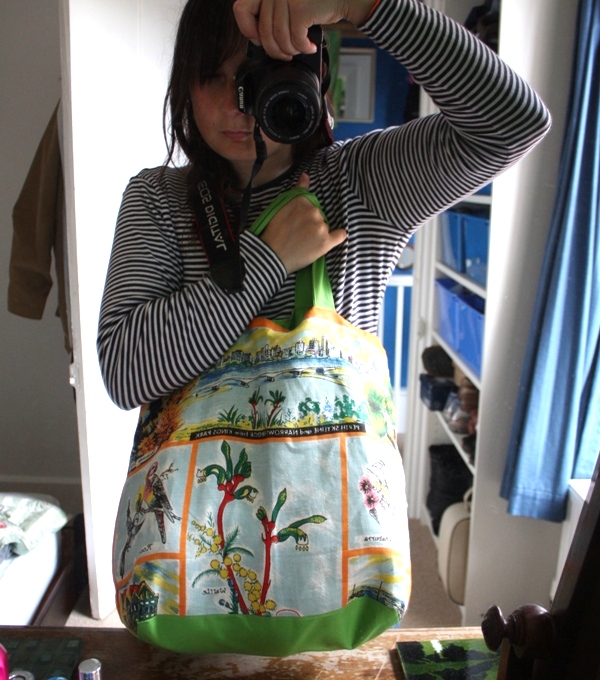 Supper for Mil this evening was a Tummy Ache recreation.

I hadn't meant to blog this morning.  I logged on to look at my much neglected blog reader and realised I would rather write a post.

I have neglected this space and it distresses me so.  I wish I had the time to dedicate more to it... perhaps this will change in time.

Anyhow, want to see what I finished?  I'm not sure I even told you I had started it, but I made a quilt for Mil.  It's blue, it's a simple nine-patch, it is quilted in a very simple way, and actually I am really pleased with it.
And the best thing is that Mil likes it.  This is remarkable as he has an inherent dislike of all that is new.  But as I put it on his bed and started to take some photographs, he came upstairs and immediately got into bed and closed his eyes for a moment, then got back out and took great care in straightening it back out again.


Last night after bedtime he came back downstairs and said 'I really love my quilt mum, thank you for making it for me'.  I don't doubt for a moment that he knew how much that meant to me.

My little Mil never crawled, instead went straight to walking.  This was great for us, as we could sit him in the middle of the room and as long as he couldn't reach any furniture then he wasn't going to go anywhere.  He was even pretty safe if left by a piece of furniture or wall as he used to shuffle his way around the edge of the room going in and out of the alcoves, until he got where he wanted.  We never had to have a stairgate at the bottom of the stairs as along with crawling, he didn't get the climbing thing until later either. 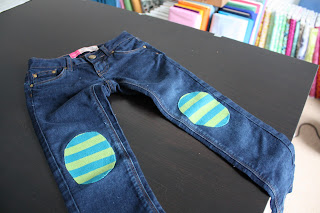 However, even with an early start with walking, he didn't take to running in the same way.  Now, he can run pretty well, but like any 3 (nearly 4) year old he still goes flying on a regular basis.  And flying boys means scraped knees, and holey trousers.
I have not been doing much (any) sewing recently.  What can I say?  I've been busy.  I am determined to do a bit more though, and before I can make real progress I have some small 'clearing the ground' jobs to do.  One of which was this patching job.
I think they look super-cute and am dead chuffed to be back in the sewing saddle.  Of course, now they have patches on Mil will probably not go near these trousers with a barge pole.  He's very fussy about what he wears... but that will remain to be seen... I'll keep you posted.﻿
at 16:31 7 comments:
Labels: Family, Mending, Sewing 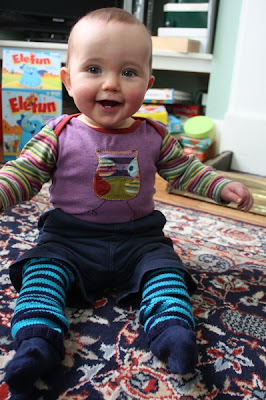 I have not been doing much crafting.  I have been snowed under with Backstitch work, and it seems that it may continue that way.  But I do sneak the odd bit in. 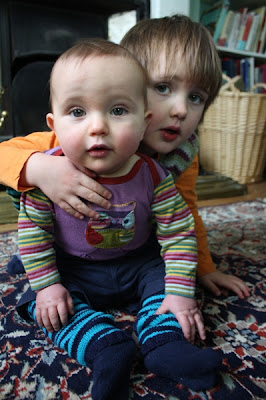 Over Christmas I made Mil some Legwarmies... Ravelry link here.  But he rejected them, so they have been adopted by Emmett.  Good old Emmett - always up for a cast off.  They are knitted with the totally gorgeous MillaMia yarn who have brilliant colours... yet another Swedish export that I can't get enough of. 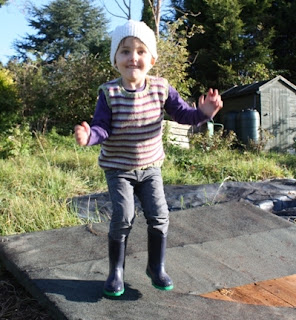 And just in shot there on Mil is his tank that I made him back in Summer.  This was my hospital knitting for when I had Emmett.  Mil did not reject this.  I told him it would make him run faster, and now it is his favourite.  The pattern was recommended by the lovely Helen over at Angharad Handmade it is called 'Bob'.  Ravelry project page here.  The pictures are taken on our allotment at the end of the summer.  We were planting peas and onions for the mice and birds to eat over winter. 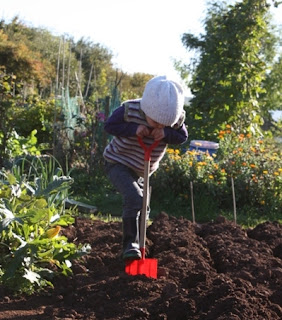 And if you're wondering if he noticed the new eiderdown... he didn't.  I couldn't believe it.  I had to point it out to him in the morning having slept under it all night.  I never for a moment thought he wouldn't notice... it was just meant to be a headline.  Oh well.
at 21:45 3 comments:
Labels: Knitting

Do you think he will notice? 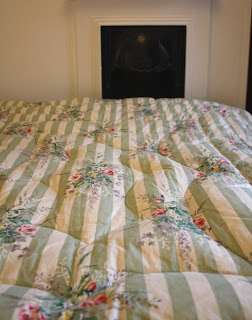 Do you think my husband will notice that we have a new eiderdown on our bed?  The red one below is what we used to have and the green one is what we have now. 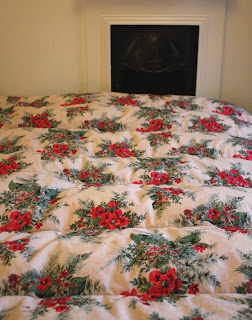 I couldn't help myself.  It was in the window of the charity shop as I ran past last night.  The shop was closed and I was pawing at the window.  I even had dreams last night of coming into the shop in the morning and seeing someone else at the till with it in their arms... argh!
This morning I piled the boys (as of course there are now two) into the pushchair and hurried up to the High Street, in the rain, to be there as the shop opened.  I won't say how much I paid, but it is worth it already.  Although, now I want new bed linen to complement the gorgeous eiderdown.  Oh dear.
And, hello!  Is this a one time only appearance or am I back for good?  I would like to think the latter, as I have missed it here.
Catch you later! x
at 17:46 10 comments:
Labels: Bedroom
Older Posts Home
Subscribe to: Posts (Atom)

Fancy Elastic
I live in Somerset with my three boys. B, the one I married, and M and E, our sons. This blog is where I talk about the things I make. Oh, and I also run a little shop called Backstitch... go take a look!